The draws are done for the 2020 Olympic Tennis Event and defending two-time gold medallist Andy Murray will begin his campaign against Canada’s Felix Auger-Aliassime, the 9th seed, who is ranked 15 in the world.

I think the experience we’re going to get at the Olympics can’t be compared to anything else. I think both of us [Maria Sakkari] really wanted to be here. The fact that it’s a thing now is an unbelievable feeling. Being from Greece, the Olympics mean a lot to us. I think both of us would agree that we’re very honoured that the Greek flag would be part of tennis this year. Stefanos Tsitsipas

Murray is the only tennis player to win back-to-back singles gold medals, having triumphed in London and Rio, but his hopes of making it three in a row have been severely hampered by physical struggles.

“The Olympics mean a huge amount to me and it’s a massive honour to be able to compete at a fourth Games in Tokyo,” Murray wrote in a contribution post for the Olympics website.

“Leading Team GB at the opening ceremony in Rio was one of the highlights of my career, and winning in 2012 on home ground was an incredible moment.

“Going to a second Olympics as defending champion is exciting and I am looking forward to the challenge.

“The Games are the biggest competition in the world and, as athletes, we train hard for moments like this.

“Tokyo 2020 in 2021 is unique, falling during the pandemic and we have seen incredible resilience from athletes, fans and all those involved in making this happen.”

Murray won consecutive matches at a Grand Slam for the first time in 4 years at Wimbledon before being comprehensively beaten Canadian Denis Shapovalov, leaving the Scot questioning whether all his efforts to try to get back to the top of the sport were worth it.

“I was very disappointed after Wimbledon,” said Murray, who has four children aged five and under. “With each major tournament that passes, or again here, when I’m getting asked questions, a lot of it is always about my future.

“And also, when I haven’t performed as well as I’d like to, you question things, doubt yourself a little bit.

“When I got home the day after my match, my daughter said to me, ‘Daddy you’re home because you lost another tennis match’. I said to her, ‘Yes I did but what do you do when you lose at something?’

“And she said, ‘You try and try again’. And I was like, ‘Yes, that’s what I want to do’. I want to keep playing because I enjoy it. I still think I can play at a high level.

“There’s been difficult moments, obviously, in the last few months, and the last year, with the injuries and stuff but, right now, this is the healthiest I’ve been for the longest period in the last year.

“That’s the goal is to try to win another medal. I’m aware that it’s not going to be easy.

“I’ve got to practise way more than I had been in the build-up to the grass and Wimbledon and everything so I’m getting better. Hopefully it stays that way through to the end of the year.”

His opponent, Auger-Aliassime, 22, has come to Tokyo on a high, however, after a strong grass court season that culminated in a first Grand Slam quarter-final appearance at Wimbledon, while he easily defeated Murray at the US Open last year. 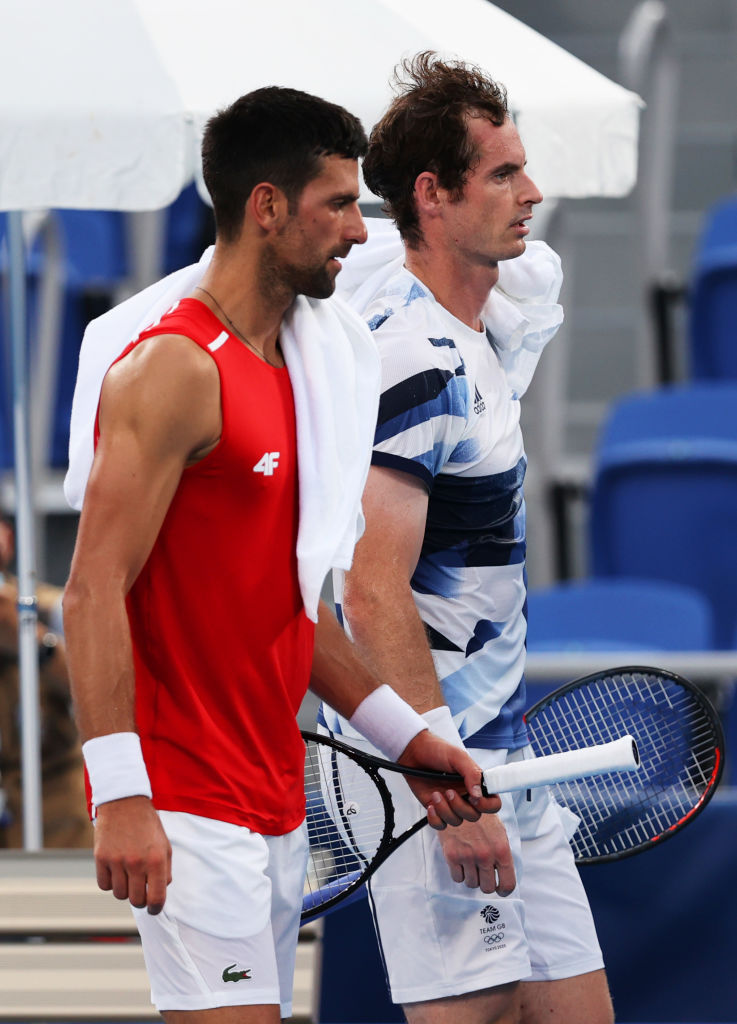 World No 1 Novak Djokovic starts the next leg of his quest to become the first male player to complete the Golden Slam when he takes on Bolivia’s 139th-ranked Hugo Dellien in his opener, but his run to the final is littered with hurdles.

Competing at his 4th Olympic Games, Djokovic could face Italy’s Lorenzo Musetti in the third round, who took sets off him at Roland Garros, and potentially could meet Andrey Rublev for the first time in the quarter-finals, and then hope to extend a 5-match winning streak against Alexander Zverev in the semi-finals.

Djokovic will need to win the gold medal in Tokyo and then win the US Open title in early September to achieve the Golden Grand Slam, a feat that has only been accomplished by Germany’s Steffi Graf in 1988.

At 34, he completed the third leg towards achieving the Golden Slam when he added the Wimbledon title to his Australian Open and Roland Garros triumphs in 2021 to equal rivals Roger Federer and Rafa Nadal on the men’s record 20 titles.

The second seed is Daniil Medvedev, who competes in Tokyo as a representative of the Russian Olympic Committee after the country was stripped of its flag and anthem for doping offences.

The World No 2 will face Kazakhstan’s Alexander Bublik, ranked 37th in the world, in the first round.

Stefanos Tsitsipas is thrilled to be representing Team Greece with Maria Sakkari, the first tennis players to do so in 13 years

In the same half of the draw is 3rd-seeded Greek Stefanos Tsitsipas, who opens against Germany’s Philipp Kohlschreiber while, in the first round, Rublev takes on Rio bronze medallist Kei Nishikori, Japan’s main medal hope in the men’s singles.

Tsitsipas is thrilled to be in Tokyo where, together with World No 19 Maria Sakkari, they will become the first players from Greece to contest the Olympic Tennis Event in 13 years

“I think the experience we’re going to get at the Olympics can’t be compared to anything else,” said Tsitsipas after practice at the Ariake Tennis Park on Thursday. “I think both of us really wanted to be here. The fact that it’s a thing now is an unbelievable feeling.

“Being from Greece, the Olympics mean a lot to us. I think both of us would agree that we’re very honoured that the Greek flag would be part of tennis this year.”

Eleni Daniilidou and Anna Gerasimou were the last Greek players to take part in tennis at the Olympic Games, having represented the nation at Beijing 2008.

Tsitsipas begins his Tokyo 2020 campaign against 37-year-old Kohlschreiber, who will make his second appearance at the Games, having also represented Germany at Rio 2016.

“Battle of the backhands, yeah,” Tsitsipas noted of their upcoming encounter. “He’s someone that I’ve played a few times in the past. It’s going to be my first match. I’m hoping for a good start – just try and play my aggressive game, play smart and make it on my terms.

“The conditions here are slightly different,” he continued. “The last couple of weeks I was playing on different surfaces and different conditions but I think after a couple of practice sessions it’s going to feel great. I think my mind is there and my body too. There’s nothing that’s bothering me right now.”

Britain’s Liam Broady, who was a late entry in the singles draw after numerous withdrawals, takes on Argentina’s Francisco Cerundolo.

In other popcorn first-round matches, 7th-seeded Pole and Wimbledon semi-finalist Hubert Hurkacz faces Marton Fucsovics of Hungary, while Russian 11th seed Aslan Karatsev, who features in the top half of the draw, meets Tommy Paul of the United States.

Half of the top 10 men’s players are not in Tokyo, with Federer, Nadal, Dominic Thiem, Matteo Berrettini and Shapovalov all missing.

Britain’s best hope of a medal may come in the men’s doubles, although Andy Murray & Joe Salisbury were given a tough draw against French second seeds Pierre-Hugues Herbert & Nicolas Mahut, while Jamie Murray & Neal Skupski take on the Argentine duo of Andres Molteni & Horacio Zeballos.

In other first round doubles matches, Croatian men’s top seeds Mate Pavic & Nikola Mektic will open against Brazil’s Marcelo Melo & Marcelo Demoliner, a late change in partnership after Bruno Soares was hit by appendicitis on his arrival in Tokyo

The entry list and draw for the mixed doubles event will both be published on Tuesday 27 July.

Players from 46 countries will compete for Olympic glory as the competition starts on Saturday at the Ariake Tennis Park.

Roger Federer is to carry on playing tennis.

When the news was announced that Jamie Murray and Venus Williams would be pairing up for the Mixed Doubles, fans were overjoyed.

Heather Watson has been tipped to make the Wimbledon quarter finals.

Wimbledon | Halep to meet Badosa as Rybakina takes on Martic next

Simona Halep, the 2019 Wimbledon champion, is proving to be the dark horse in the women’s draw, steadily coming through to become a clear favourite for the title now that Iga Swiatek, the World No 1, is out of contention after her premature loss to Alizé Cornet...

The record run is over. After 37 matches won, Iga Swiatek has lost, to giant-killing Alizé Cornet, who took her out on a day of shocks, 6-4 6-2, on the World No 1 on No 1 Court at Wimbledon, while others to fall on Saturday included Coco Gauff, Barbora Krejcikova and...

Zverev is the new Olympic Champion